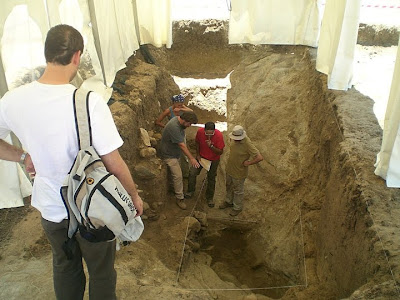 Lots of things can happen inside a ditch, like discussions between archaeologists, for instance.

The data coming out of ditches, when conveniently published, ravels that many actions took place inside, some of natural origin, most of human initiative. Along the filling layers we can detect organized depositions, pits dug in previous layers, stone structures, human burials, etc. In Portuguese enclosures, we can observe this in several sites where excavations are larger than a small section: Perdigões, Santa Vitória, Porto Torrão are some examples. Structured deposition inside ditch 3 of Perdigões.

This is not very consistence with the idea that those ditches were built to be water canals or drains, a justification that continues to be too easily adopted in some discourses. And another inconsistence is the topography (which I already classified as very important in enclosures interpretation). Most of those enclosures are in slopes, with significant differences of altitude between the several sections of the ditches. Because of the water levelling, this topographical situation implied that water would concentrate in lower sections, living large parts of the ditches dry when the water was less, overflowing the ditches when the water was too much.

But of course water run inside ditches in rainy days. That is inherent. And when it rained hard, erosion took place, just like ditch 3 of Perdigões shows at middle depth. This could be an argument for the drainage theory. But in sites with the topography of Perdigões, an amphitheatre, the water would run rapidly to East and concentrate in the upper side of the entrances that interrupt the ditch, generating a pull and overflow the entrance. At Xancra and Monte do Olival, located in slops orientated to East and with their entrances also in the eastern parts of the enclosure, this would mean a permanent flooding of the doors and of the low parts of the enclosures. This would be very inconvenient and, mostly, would have left evidences in the strata sequence that was not yet recorded in the excavated sites.

A drain should not be interrupted and should be proportional to the draining needs. So why built drains of 7 meters wide and 3,5 meters deep? That’s a canal of the Industrial Revolution. Why built wavy drains of 2,5 meters wide and 1,5 deep to drain an area of 20m diameter at Santa Vitória or Outeiro Alto 2?

For all those reasons, water canals and reservoirs or draining structures are not very consistent primary functions to explain the building of the most part of ditched enclosures. Water flows inside them. But as intrinsic circumstance that comes along with this kind of structures. Not as an intended one for the building decision. And if there are exceptions, they must be empirically demonstrated by evidence from strata sequences inside ditches and by topography consistence and not simply assumed. 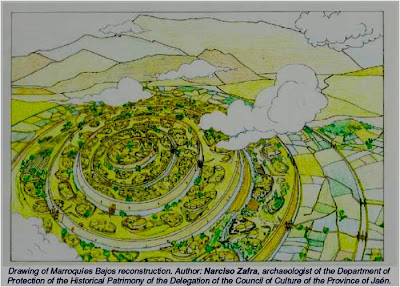 Reconstruction of the set of enclosures of Los Marroquiés Bajos (Jaén, Spain), assuming the ditches as water canals
Publicada por A.C.Valera em 11:00 AM