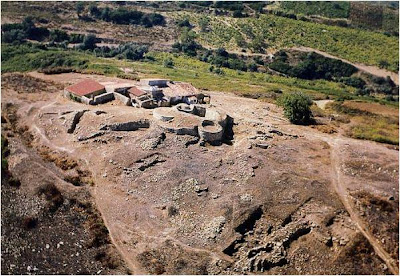 During the seventies of the XX century, Carlos Tavares da Silva and Joaquina Soares undertook an approach that was based on localism and on a materialistic theoretical background. The emergence of Chalcolithic societies in South Portugal was seen as the consequence of labor development and production intensification, framed by a Secondary Product Revolution dynamic. This social-economic development would support segmented political structures, characterized by autonomic communities, basically equalitarian, organized at a local scale. Localism was seen as a reinforcement of social relations based on sedentary residence and in territorial contraction, generating a social, economic and political autonomous environment, according to the model of “one site / one fortification / one territory / one community”. Autarchy and competition for strategic resources would have generated a condition of “global war”, responsible for the fortification of settlements present for the first time in the archaeological record. War would export conflict and tension to inter-community relationships and preserve the internal unit of the group on an equalitarian basis. Finally, equalitarianism and political autarchy were seen as reaction to a centralist and hierarchic process, allegedly emerging in the late Neolithic. This was the theoretical background to explain the Chalcolithic walled enclosures.

Theoretical disputes apart, this model suffered from problems of scale and data. At the time, few Neolithic and Chalcolithic enclosures were known and fewer were excavated in Alentejo. It was pioneering times. Discourse was built on a reduced number of isolated sites, scarcely excavated in the majority, and quite distant from each other, extracted from their unknown settlement networks context and landscapes. A more realistic density and diversity of territorial occupation was yet to be disclosed, and the situation was propitious to localism and to interpretation centered on the site regardless its context: the site was the scale of analysis and then, by a generalization process, discourse was extending to a regional scale (Southwest Iberia). A uniform pattern of chacolithic settlements location was establish: high places, with good visual control of landscape and fine natural defense conditions.

Naturally, today this picture is no longer empirically sustainable and is also questionable theoretically. But, at the time, it was the first attempt to introduce historical materialism in the Portuguese Recent Prehistory. And, in the context of an Archaeology dominated by Cultural Historical perspectives, based on diffusion as the major mechanism to explain social change, that regarded the walled enclosures (first) as colonies and (after) as trading posts, this materialistic approach became quite refreshing at theoretical level in those days.