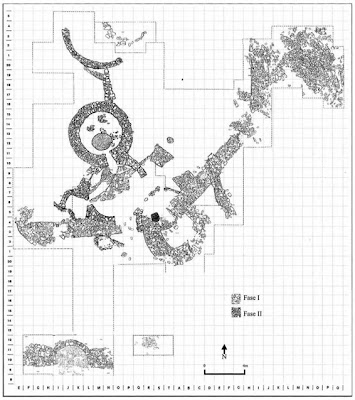 Located on the top of a small hill in the left bank of the Guadiana river, the site is today totally submerged by the Alqueva dam.

Two phases of occupation were detected, separated by a period of abandonment. The first phase was related with a construction of a walled enclosure, with three rows of stone (and possibly also earth) walls interpreted as fortifications. Only the plan of the interior one is partially available, and is composed by strait walls suggesting a polygonal shape, with a bastion in one corner. This phase is dated from the first half of the 3rd millennium BC.

The second phase is related to the construction of several connected circular stone structures. A central one (with entrances to three of the others) is considered a “tower”, while the rest (some of them of the same size) are considered huts. This reoccupation of the site is made over the ruins and abandonment levels of the first phase, is dated from the second half of the 3rd millennium BC and associated to the presence of bell beaker pottery (International style) and copper metallurgical work.

On the other side of the river, just 15 kms away, stands the large set of enclosures of Perdigões, older than Porto das Carretas (started at Late Neolithic) and contemporaneous of its both phases of occupation.
Nevertheless, a “world of differences” separates the two sites. Architecture, dimension, duration, topography of location, relation with funerary practices, evidences of connection with distant regions, etc. And another “world of differences” occurs today in the interpretation of those dissimilarities.
Publicada por A.C.Valera em 9:56 AM