The number of known ditched enclosures in South Portugal has been increasing in the last years, being almost thirty now. Between them, several present a peculiar design that has been designated by “sinuous ditches”. This peculiar configuration didn’t raise the necessary attention to its interpretation, as a result of a functional attribution that doesn’t question the ideological foundations of architecture.

In a recent paper (Valera, in print 2010) I presented a first attempt to organize these particular designs in four basic categories according to integral or almost integral plans of ditches: 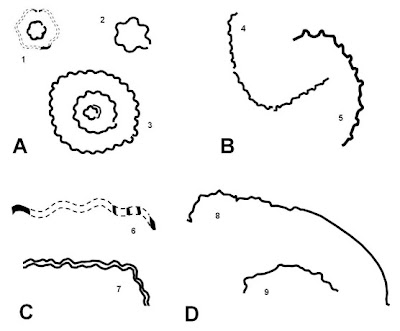 This morphological diversity is certainly meaningful and the traditional association to the design of walls with bastions, if arguable for some of these categories (such as the B. or even D.), is clearly unacceptable for the A. and C.. Explanations for the particular designs like the ones in Xancra, Santa Vitória or Outeiro Alto, that so far represent a specificity of the middle Portuguese Guadiana basin, need to be searched elsewhere. In the quoted paper I argued that some answers can be found in the ideological connotation of architecture, namely in its cosmological foundation. Locations, topography, astronomic orientation, landscape connections and design, all talk about architectures that are impregnated by cosmologic senses, without which these sites cannot be comprehended.