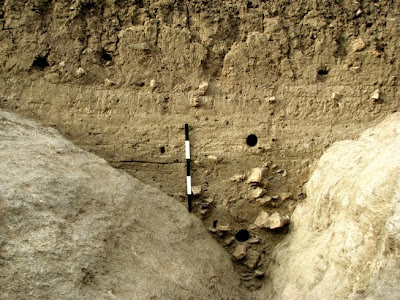 Ditch 3 at Perdigões set of enclosures

One of the main questions on ditched enclosures is the nature of the filling processes of the ditches. Natural courses, usually surface erosion; human activity associated to discarded rubbish; human activity related to structured and meaningful depositions. These are the most debated origins to explain the deposits inside ditches. But, once again, theoretical debate and empirical evidence kept missing each other, resulting in axiomatic disputes.

In Perdigões enclosure, ideas are being tested. Different ones. Competing ones. Ideas that may be conciliated. Ideas that cannot.

Regarding the filling processes, the wavy ditch 3 revealed an interesting situation (Valera, 2008). A first dynamic of clear human origin, characterized by horizontal depositions of layers of stones, pottery shards and faunal remains (also with some human remains) was in course until the middle filling of the ditch. This process was dated by radiocarbon from the first half of the 3rd millennium, with equal dates from the bottom and the top of this first sequence, suggesting a relatively "rapid" filling (Valera & Silva, 2011).

Then, an episode of hydro erosion occurs inside the ditch, excavating a canal and generating sedimentation of silt layers, with little archaeological material. 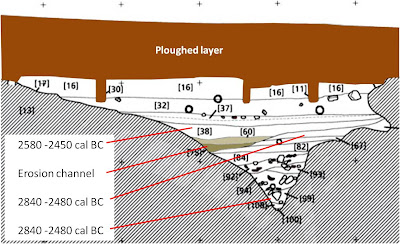 The filling of the upper half of the ditch corresponded to a different dynamic. Structured depositions of human origin continued, but were much more restricted and of different nature. The archaeological material is now of smaller size and more disperse. Stones are rare. And the radiocarbon date for the beginning of this phase points to the middle of the millennia, statistically representing a latter moment.

The sequence was also independently detectable in the faunal analysis (Costa, in print), confirming the stratigraphic observations and radiocarbon dates.

So, we can conclude:

b)This process, apparently rapid, stopped at middle ditch depth, and a hydro erosion process dug a small canal on the surface of the filling deposits.

c)After some time (which means the ditch half full was open for some time) a new process of filling begun, with different characteristics, where human and natural processes seem to conjugate.

d)No evidence of bank erosion was detected inside the ditch, and another one (Ditch 4) was excavated just 2,5 m distance by the inside. Radiocarbon dating shows that this opening was contemporary of the 2nd phase of the filling of Ditch 3, that definitively didn´t have an associated bank.

This process reveals that there is a decisive human intervention on the filling that, at list in the first phase, is much more important than natural processes. It also shows that the association of ditches with banks must be demonstrate and not simply presumed. Finally, it demands theoretical explanation of the nature of the human depositions, also empirically tested in honest ways and not axiomatically (or devotedly) assumed.

Why was this ditch opened and filled partially with selected materials that don´t represent a natural assemblage of the artefact universe of the communities? Why that process stopped at a certain stage and another ditch was open just a couple meters way? Why the ditch was softly waved? Why there are no evidence (on the contrary) of palisades or banks associated to it? Why are there human remains inside the ditch? Why is the ditch section profoundly asymmetric? Why...

In fact, before answer, and instead of assume, we must ask.