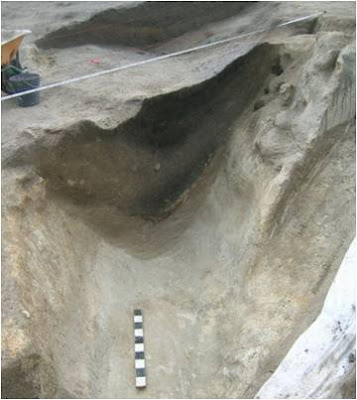 The Forca site was the first ditched enclosure identified and surveyed in North Portugal and still the only one publicly known in the region, which turns it into a singular case in the Northwest Peninsula archaeological context.

It was surveyed in the context of rescue archaeology and several negative structures were identified and briefly diagnosed: ditches with different orientations, sizes and plans; long and narrow trenches and a large number of sub circular pits. Some of these structures intersected each other, revealing different construction moments, and some evidence of ditched re-cutting were recorded.

One of the ditches (ditch 1) was surveyed in two different locations and revealed different sizes. In order to obtain absolute chronologies for the base of the filling deposits of this structure two samples were collected and dated by B-OSL. One of the samples dated the first filling up of the ditch to the regional middle/late Copper Age (second half of the 3rd millennium).

Unfortunately, the limits and configuration of the enclosures aren’t known, which is a strong limitation to interpretation. Other archaeological work has been done after this first intervention, but still waiting for publication.
Publicada por A.C.Valera em 9:27 PM