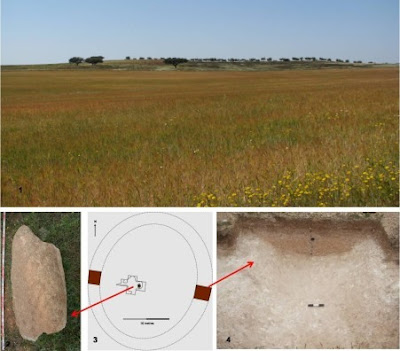 Monte de Cortes 1 is a small ditched enclosure that was surveyed by Era Arqueologia S.A. in the context of rescue archaeology developed in Brinches section (Serpa, Beja) of the water supply project of Edia. The water tube trench cut the enclosure in the middle and two sections of the ditch were excavated. Almost in the middle of the enclosure, a menhir was implanted and another one was recorded nearby at the surface. Some pits, previous to the menhir, were excavated, but no other contexts were found inside the enclosure (along the trench excavated).

According to the evidences, the ditch seems to be of oval or elliptical plan and of short dimensions. The in situ menhir is not at the centre, but slightly to west. The sediments inside the ditched provide few archaeological material, basically some lithics that don´t allow precise chronological determination. Therefore, sediment sampling was done by the Portuguese Nuclear Technological Institute to effect B-OSL dating.

The enclosure of Monte de Cortes 1 is surrounded by pit structures filled with sediments but without archaeological materials. 200m East, in Monte de Cortes 2, several pits were detected and excavated (those with materials suggesting Chalcolithic chronologies) and an hypogeum with human remains dated from the 3rd millennium BC was also excavated.

The site seems to be one and only but, because of the nature of the project (a linear one) and of the police of rescue archaeology (excavation strictly in the affected area), we don´t have the real notion of the spatial connections. We are, then, left to an educated guess: that we are in presence of a complex site, with several specific areas and architectures that we aren´t able to really understand with the available data.

Located in a top hill, with an open view over the local landscape, Monte de Cortes (1 and 2) seems to be an important site in the organization of local landscape, maintaining visual contact with the enclosure and necropolis area of Outeiro Alto 2. Geophysics is programmed, now in the context of research, trying to get an image that allows improvement on interpretation.
Publicada por A.C.Valera em 8:51 AM