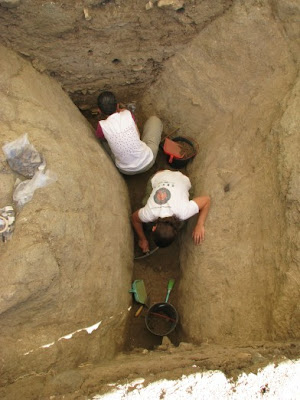 Human remains in dicth 4 of Perdigões enclosure (I’m not actually refering to the persons in the image :), but to the humam bones off a hand foud in that area of the ditch)

The large enclosures of Southwest Iberia (such as Perdigões, Porto Torrão, Alcalar, Valencina de la Concepción, San Blás or Pijotilla) developed necropolis in peripheral or internal areas, with dolmens, tholoi type monuments, hypogea or pits. But another circumstance is currently and repeatedly reported: the presence of human remains in some of their Chalcolithic ditches. All of the referred present evidences of this practice, with the exception of Alcalar (until now).

Traditionally, the presence of scattered human bones, bodies or parts of bodies was interpreted as discarded rubbish. This is the way the situations in Pijotilla, Valencina or Porto Torrão were interpreted. Recently, in the publication of the first contexts documented at Perdigões (Valera & Godinho, 2010), I argued that this is an European practice and discussed some patterns that indicate intention and meaning, suggesting that this is just another practice of body manipulation and funerary management of the dead, probably articulated with other practices and other scenarios, and that at least some enclosures assumed an important role regarding those practices.

The idea of megalithism, as the main funerary expression of those communities, needs urgent revision. And some enclosures play an important role in that revision, since their traditionally assumed dichotomy settlement/graveyard is starting to be in serious crises.

But even more interesting (at least for me) is the fact that this revision will lead us to inquiries on cognition, world views and notions of the body (and of the concept of unit).
Publicada por A.C.Valera em 9:22 AM