Three or four decades ago, the origin of walled enclosures was a “heat issue” in Portugal. The battle was between two enclosed positions and a traditional "3rd way": the ones that see these architectures as a result of direct diffusion; the ones that see them as an independent local achievement, resulting of local social developments; those in the middle, that talked about local dynamics using external ideas.

Rarely, though, the debate was supported on detailed analyses of the architectures. And some details clearly seem to indicate that, responding to a general and shared European idea (just like the ditched enclosures), there is a strong link to pre-existing knowledge. This can be easily argued to the entrances of Castro de Santiago and Fraga da Pena, in the Ribeira da Muxagata, Fornos de Algodres, Central Portugal. 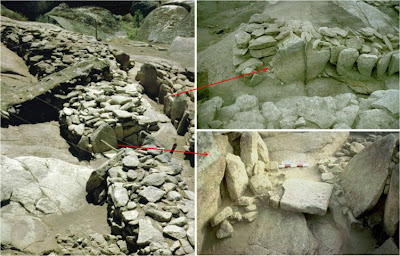 Both entrances correspond to a short corridor that cuts through the wall and structured by vertical monoliths in each side, leaning against the stone rows of the wall. At Castro de Santiago, the two walls make a bigger corridor between them, and the South wall of the corridor also presents a revetment of vertical monoliths. These architectonic solutions, as I suggested elsewhere (Valera, 2007), seems to be directly derived from megalithic architectonic engineering, since they are very similar to solutions, in concept and layout, adopted in previous passage graves. 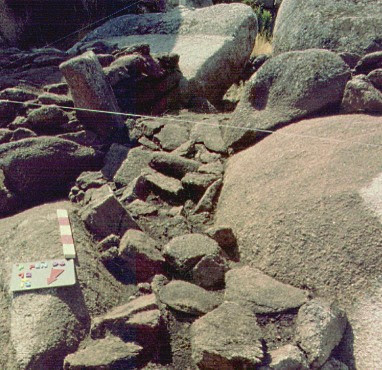 But the debate is, in fact, a false one, since is basically a problem of scale and of whole / part relationship. At a large scale, at an European level, there is a general trend in Europe. That trend explains the Megalithism, the circular ditched enclosures, the building of stone walls, the sharing of certain technologies, as extended phenomena. It expresses itself through local and regional specific solutions that justify both the observed similarities and particularities. But we shouldn´t regard the whole as the adding of these particular ways. On the contrary, what we regard as part should be understood as a unique, a specific, layout of the whole. Ditched or walled enclosures anywhere should be comprehended in a wider European context, not as a part of that general trend, but as a particular and local rooted expression of it. This overcomes the traditional dichotomy, and allows us to address similarity and difference in an integrated way.
Publicada por A.C.Valera em 9:29 AM