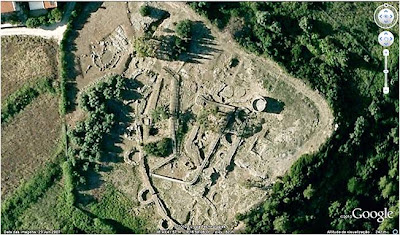 Leceia is a well known walled enclosure, located near Lisbon, in a Tagus tributary (Barcarena stream). The site stands in the limit of a cliff and, after an open occupation during Late Neolithic (2nd half of the 4th millennium BC), a set of three walls with bastions were built in first quarter of the 3rd millennium. The walls are roughly semicircular and concentric, defining enclosures that use the cliff also as a limit. In a sense, it is the same logical use of topography that we find in the French contemporary enceintes an éperon or in some British proto historic enclosures. In Portugal, the incorporation of that specific topographical pre condition in the design of the enclosures is rare (maybe Columbeira presents the same situation in the north of Lisbon peninsula). More frequent is the use of prominent rock formations, to which walls are added forming the enclosures, as we can see at Fraga da Pena, Castro de Santiago and Castelejo in the hinterland of central Portugal, or in Penedo Lexim, in the Lisbon Peninsula.

At Leceia, after a period of functioning of the walls, it seems that they ruined and occupations continued over those ruins, till a bell beaker phase. The site has a long series of radiocarbon dates.

Interpreted as a fortified settlement of agro pastoralist communities, Leceia is one of the two Portuguese walled enclosures that present an inside funerary context with human remains (the other is Castelo Velho, in the north). In Leceia’s case, the context was interpreted as a dump.

This presence of human remains is, in fact, one of the interesting, and probably meaningful, contextual differences between walled enclosures and the large ditched enclosures, that present an inescapable direct relation to funerary practices and architectures.
Publicada por A.C.Valera em 9:20 PM