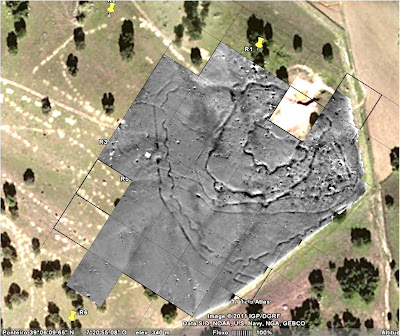 Moreiros 2 was identified by Rui Boaventura in a gravel quarry. In the quarry profiles, two ditches were identified and a small ditched enclosure was assumed. Contacting Rui, I had his agreement (and field cooperation) to incorporate the site in the NIA-ERA project (financed by Gulbenkian) on cosmological foundation of enclosures designs and geophysical prospection was done (the team was composed by Helmut Becker leading the geophysics, me, Rui and Nelson Cabaço).

Once again, surprise was expecting us. The site is much bigger and complex that the initial observations suggested. The enclosures go, at list, up to nine (in a provisional counting). The area enclosed is much bigger and some lines of enclosures assume configurations (adapting to the topography) that are quite rare (not to say absolutely new) in the region. Entrances are various in number and configuration. Palisades are, definitively, present in the definition of some of the enclosures.

But, at the surface of the site, almost no material was found. And this is another important result of Moreiros prospection: we have to be very carefully about deductions supported on surface findings. How many enclosures are enclosing “open sites” defined by surface findings in Alentejo?

Surprised by the size, we weren´t able to finish the geophysical survey. We plan to finish it next month, if no further surprises appear (that would be quite welcome, if I may add).
Publicada por A.C.Valera em 3:11 PM