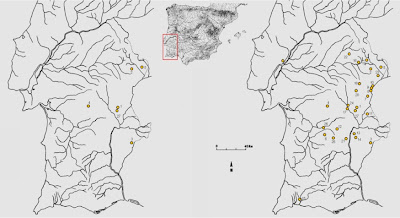 Most of the discoveries have occurred in the context of rescue archaeology, but some were the result of research projects. At the moment, and up to my knowledge, there are three long term research projects on ditched enclosures in the region: the one of Alcalar, developed by administration, and the ones of Perdigões and Archaeoastronomic Fundamentals of Ditched Enclosures Architectures developed by NIA-ERA (with other associated institutions).

There are, though, several academic works being prepared on ditched enclosures in the sequence of rescue archaeological excavation. That is the case, for example, of the large enclosure complex of Porto Torrão. Others, like Outeiro Alto 2 and Cortes, were integrated in wider research projects financed by Portuguese Science and Technology Foundation.

In fact, the last 14 years have seen a substantial change in the “archaeological landscapes” of South Portugal and, consequently, there is a whole new Prehistory to be written. There is a lot of work being done in this issue at the moment, with different theoretical approaches, so a significant development of knowledge is expected in the following years.
Publicada por A.C.Valera em 8:54 AM