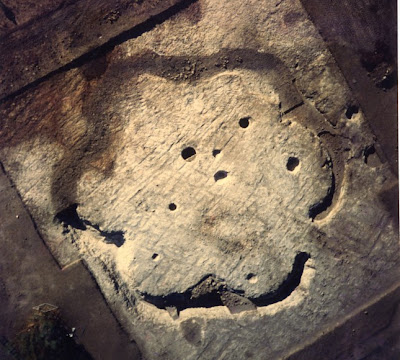 Image of the inside enclosure of Santa Vitória, published in Valera & Filipe, 2010, courtesy of Miguel Lago.

Santa Vitória was the first ditched enclosure identified and partially excavated in Portugal, during the eighties of the XX century. Naturally, according to the dominant paradigm of the time, it was seen as a settlement, a small fortified village, with an earth bank associated to a ditch. The strange configuration of the ditch was seen as a previous design of what would became to be known as the bastion walls (I recently developed a critique on the matter, still in print). 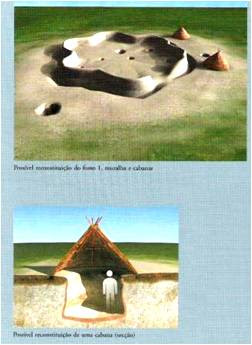 Reconstitution of Santa Vitória by Ippar.

No attention was given to the fact that there was no evidence of bank erosion inside the ditches. The fact that there were structures and clear deposition assemblages inside the ditches were not questioned, since the idea of settlement was also not to be question. Like Rabelais couldn’t be an atheist in the XVII century, this kind of sites couldn´t be anything else but fortified domestic settlements.

Well, nowadays “the times, they are changing”. In the context of winder and strong evidence from other Portuguese enclosures and different theoretical approach, Santa Vitoria can be reviewed. If there was an inside bank, as the reconstitution image suggests, where is the bank earth (supposedly geological material)? Not in the ditch, filled by deposits with a great number of archaeological material, stones and structures. If there was a bank, how could some pits be where they are (in the place of the presumed bank)? The design, we know now, is not unique and seems to respond to a pattern observed in other sites that strongly suggest that there is a cosmological foundation to this design (such as Xancra or Outeiro Alto 2), that have little to do with defence strategy. The apparently summer solstice orientation of the door of the inside enclosure is now being explored in the context of the NIA’s project ”Ditched Enclosures Plans and Neolithic Cosmologies: a landscape, archaeoastronomic and geophysical approach”.

Unfortunately, the publication of excavation results is minimum, which makes it harder to go into deeper discussion, namely about the depositions inside the ditches, since there is news of very well preserve contexts.

Santa Vitória, though, still has a lot of informative potential to the actual debate going on in Iberia about the social role of this kind of sites.
Publicada por A.C.Valera em 10:28 PM