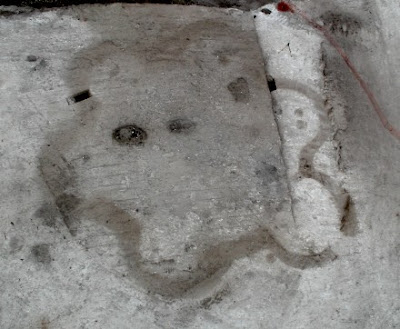 It is an enclosure defined by a single ditch, presenting a design similar to those of Santa Vitória and Xancra: a wavy ditch, forming a sequence of well standardized semi-circular lobes, with an entrance orientated apparently to winter solstice.

It was identified in the context of the water distribution net of Alqueva dam. The ditch was surveyed in two areas by ERA Arqueologia S.A., and the archaeological material point to a Chalcolithic chronology.

The enclosure is at the East end of a small hill, while at the West extremity there is a possible wood henge surrounded by three Late Neolithic hypogea, and in the middle, to South West, a necropolis of pits and anthropomorphic hypogea from Bronze Age. Even in the area of the enclosure, some of the pits excavated revealed Late Neolithic contexts.

So, the enclosure is located in a hill that was developed through time as a space of social aggregation and of sacred and symbolic social practices, where the earlier was a condition for attraction and spatial organization of the later.

An example of a significant “place building” during 1,5 thousand years, showing how deeply rotted can be a sense of place and how meaning can be accumulated through time, generating the social memory of a place and landscape.
Publicada por A.C.Valera em 7:04 PM