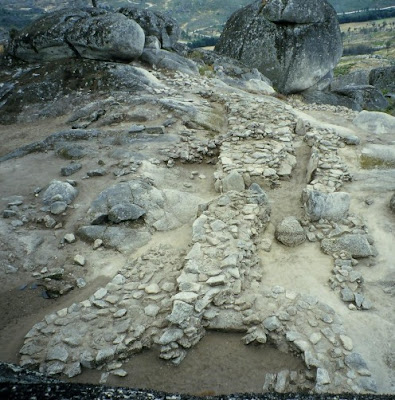 Double wall of inside enclosure.

Door of the outside enclosure.

Excavated between 1988 and 1996, Castro de Santiago is a walled enclosure dated from Chalcolithic (first quarter of the 3rd millennium BC, by radiocarbon). Distant just 8 Kms from Fraga da Pena, and in the same valley, the site also uses a large granitic tor existent in a prominent hilltop to form two enclosures.

The inner one uses the top rocks that naturally form a “U” shape open to South. The enclosure is established by a double wall with a bastion structure built in the open side of the rock sequence. The two walls structure an entrance in “S” shape and to phases of occupation were detected inside, with huts, fire places and cobble structures.

The outside enclosures is defined by two parallel walls, one at East and the other at West, uniting rock formation at south of the inner enclosure. There is no evidence of structures and areas of sedimentation are rare and small, since the ground is basically constituted by the granitic bedrock.

The site was interpreted as a walled settlement that played a decisive role in the emergence and consolidation of a local identity during the first half of the millennia, process that was declining (through integration in a wider regional system of social relations) by the time Fraga da Pena appeared (Last quarter of the millennia).
Publicada por A.C.Valera em 7:11 PM