Has been recently suggested (Diaz-del-Rio, 2008) that some structures of Iberian chalcolithic walled enclosures may have a construction organized by modules. It is argued that the main walls (and not just re-buildings or re-enforcements) might have been built in sequences in time and not in short and continuous periods (building at once; building phase). Each module would be a specific project of a specific part of the community and related to the capacity of work and resources mobilization present at each time. The final building would be an aggregation of segmented projects, expressing the social organization of the community itself. As Iberian examples that suggest this sort of modular building Los Millares (south Spain) and Castanheiro do Vento (north Portugal) were presented . 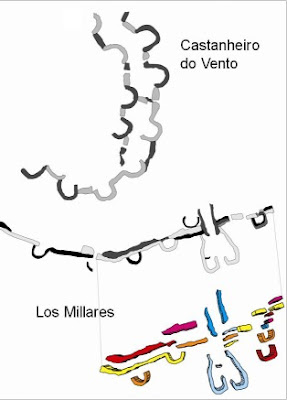 In fact, this kind of situation has been also observed in ditched enclosures. In Germany, at Herxheim, the final image of a ditch seems to be the result of a sequence of elongated and overlapping pits. The same was reported to the Portuguese enclosure of Salgada, where the ditch was built in sections (see here).

In recent papers on sinuous ditches (Valera, in print) and on the Xancra’s geophysics (Valera & Becker, 2011), I analysed the image of Xancra and question if the same situation is not present, since similar modules (to the ones proposed to Castanehiro do Vento and Los Millares walls) are apparently suggested by the image. 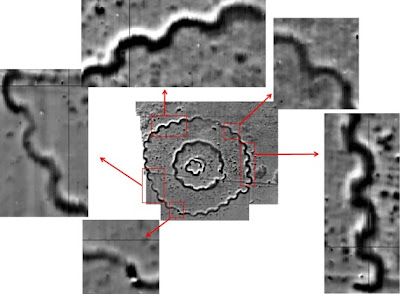 Naturally, this is not just a matter of building strategies. It has strong implications in the theoretical models we generate to these communities. If huge architectonic structures are built in smaller segments through time, requiring less labour mobilization and control, less logistics, they became accessible to smaller segmentary communities of parental bases, that don´t have a developed and strong social hierarchy. If so, we must carefully question how large constructions are, in fact, built and assume that heavy architecture can no longer be use uncritically as undisputed evidence of a highly social and political complexity.

On the other hand, it draws attention to the problem that many constructions are a result of a long process of construction and use, and that there is not an evident gap in time between the “building phase” and the “using phase”: architectures as living processes of construction.