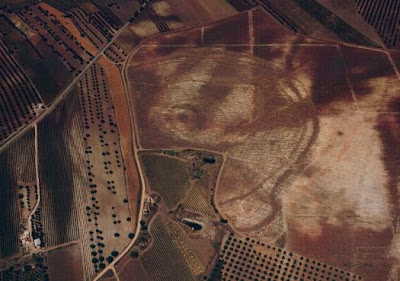 The site was identified in the eighties of the XX century, but only in 1996 was recognized in all its extension and architectonic complexity. This happened after a deep plough for planting a vineyard. Now, we know the site has an area around 20ha, and 3/4 is inside de Perdigões farm, a Esporão property. Today, a significant part of this context is an archaeological reserve and has been object of continuous research since 1997, coordinated by NIA-ERA Arqueologia S.A. and participated by several institutions and researchers.

Since 1996 taht we have an aerial photograph that shows several ditched enclosures. But the geophysical prospection undertook in 2009 and 2010 (by Málaga University, whith the coloboration of NIA-ERA and implemented by Helmut Becker) represented a major advance in the knowledge of the site. 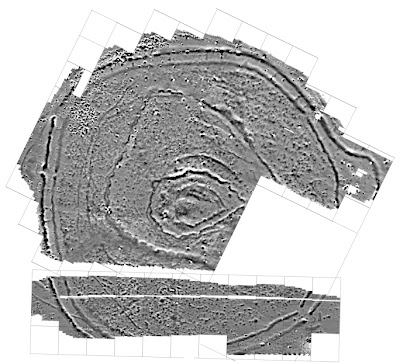 The archaeological complex is composed by a sequence of ditches, roughly concentric. The ditches that have been already excavated present different sizes and depths. The central one dates from Late Neolithic, the middle wavy ones from the first half /middle 3rd millennium, and the outside one was still partially open when bell beaker arrived at the site (probably in middle / 2nd half of the 3rd millennium. The site seems to have lived for about 1500 years (condensed in that geophysical image) .

In the east side, the outside ditch defines a semi circular area where a necropolis of collective tombs is located. Two of those tombs were fully excavated and revelled secondary depositions of human remains and a great variety of votive artefacts. The tombs are partially excavated in the bedrock and present different compartments: a circular chamber, a small corridor and an atrium. The chamber and the atrium are coated with clay sediments and schist flagstones, while the corridor was built with small monoliths of diorite. We don’t have information about the roofs.
Although absolute dating is not yet available, the architecture and the material culture point to a Chalcolithic chronology from the first half of the 3rd millennium BC, with a probable reutilisation of Tomb 2 during the late 3rd millennium BC.

But funerary procedures were not restricted to the necropolis. In the inside enclosures, a pits area has been identified and some of the pits present human funerary primary depositions, dated from the transition from 4th to 3rd millennium. In the neighbouring wavy ditches (ditch 3 and 4) human remains were found in the filling deposits and in the central area a pit was filled with remains of human cremations dated from middle 3rd millennium. Funerary practices are, then, quite diversified and complex and seem to be present wherever we dig in the enclosure, as happen in several other European enclosures.

The amount of archaeological material and faunal remains is huge and diverse, revealing a strong interaction with other regional peninsular areas. Apart from local materials, we should highlight the presence of idols made of limestone and ivory, bell beaker pottery, copper and gold artefacts. Analysis showed that the ivory is from African provenance.

The location of Perdigões enclosure has a clear connection to cosmology. Topographically speaking, the enclosure is in an amphitheatre open to East, to the Álamo valley and its megalithic territory, with Monsaraz hill marking the horizon. The necropolis is located precisely in the eastside of the enclosure and next to it, in that same side, there was a cromlech. The doors in that side define the East quadrant, one in each side of the necropolis, and are orientated to both solstices. To North, South and West, visibility is restricted by the topographical limits of the site define when the outside double ditch were built. All architectonic organization suggests planning, intentionality and cosmological bonds.

The site has an interpretative centre in the medieval tower of Esporão farm, near Reguengos de Monsaraz and is now object of one of the most important and innovative research projects of Recent Prehistory Portuguese archaeology. An extensive list of bibliography is available (see above).
Publicada por A.C.Valera em 11:54 PM